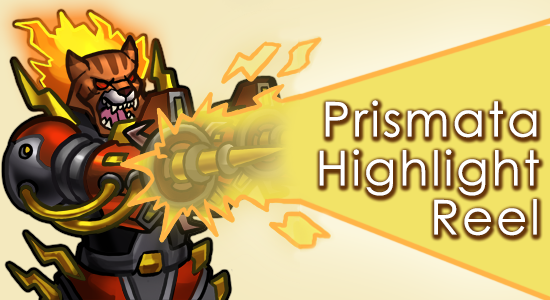 Elyot's notes
My old friend, the Antima Comet. Contrary to popular belief, it isn’t really overpowered; it merely can do a lot of work in the right situations. Coaxing the game toward one of those situations is often hard when your opponent is also threatening to switch to Antima Comets, and getting Antima Comets too early is a recipe for disaster, so timing is crucial. The decision to put down a second Blastforge and Conduit on turn 5 proved to be clutch, as my Antima Attack was just barely strong enough to overwhelm Mike’s defenses. At the same time, I had to sacrifice ALL of my drones to protect my engineers, ensuring that my Antima Comets could do the maximum possible amount of damage.

Antima Comet all-in attacks often lead to very strange and asymmetrical positions in the event that they don’t win the game outright. After the smoke cleared and I had run out of comets, Mike had destroyed all of my Wild drones and had three attackers left. Fortunately, I had a Wall still up, so his 3 attack per turn could only kill one engineer at a time. This left me with a 10-turn time limit to rebuild and win the game with just one single Militia. Fortunately, one single worker is enough to seed the production of an entire new army, and I was able to get up a Xeno Guardian before all my other defenses were destroyed, sealing the win for me.

2. “That was actually clutch! Holy shit!”

I don’t want to spoil this Elyot versus David game for you, but I will say it is Epic. With a capital “E.” Here’s what happens when a game of Prismata gets to be 1 unit away from a draw:

Elyot's notes
This was another blitz game, so it’s full of suboptimal plays like me forgetting to work with a Doomed drone on Turn 8. David and I both went for a big blue build with Shredders and Drakes, battling to rush each other down as fast as possible.

The key turn was my turn 10. Faced with a threat of 7 damage (not 10, as David’s Shredder would be destroyed and his second Drake would not be able to fire for 5 damage due to David lacking a second Blastforge), I desperately needed to keep my own Drakes alive. I left all my Drones back on defense to ensure that David couldn’t kill a Drake upon breaching me, and bought one last engineer with the 3 gold I had banked from the turn before. That engineer ended up securing the win for me, as David was left one single damage short of being able to take out one of my Drakes on his 12th turn. Had I not bought that engineer, the game would have been a draw, as both of us would have been left with a single Drake with no Blastforges left to activate them.

Out of all the crazy games played in the last 2 weeks, this Elyot vs. Timex game will have you saying “WTF?” like no other. I’m pretty sure you can see Elyot go through the 5 stages of grief as this game progresses… Plus, watch in full screen to see Alex go crazy in the chat.

Elyot's notes
This whole game was just insane. With Scorchilla, Frostbite, and Tia Thurnax all available, the game was certain not to last long. Timex and I both went for a quick Thurnax, with me having a weaker economy but getting the Thurnax first. What followed was an all-out war as we slaughtered each other’s entire forces until we each only had one Conduit and one Animus remaining. Normally this would be a draw, but Cluster Bolt was in play, giving us both a way of damaging the opponent without any economy.

As it turned out, Mike’s Conduit had 3 hit points and mine had 2 hit points, having been partially damaged by the final volley from Mike’s Tarsier immediately before I breached and destroyed it. This single hit point was the difference between a mutual elimination and what actually happened—Timex surviving with a single hit point remaining on his Conduit after my last Cluster Bolt activated.

More Prismata highlights will follow in the weeks to come. If you want to catch the games as they happen, check out our Twitch channel, and don’t forget to follow us so that you’re notified whenever we go on the air.