Two quick announcements regarding balance on the Prismata alpha server:

Redeemer’s getting another makeover

Redeemer’s been having a tough time. After multiple balance changes, the latest Redeemer looked promising. Unfortunately, some terrifying new builds were discovered, including the crushing “Thunderdeemer” rush for player 2, popularized by Zezetel through his fascinating article on the subject. For this and other reasons, we’re going to be releasing a reworked Redeemer later this week. 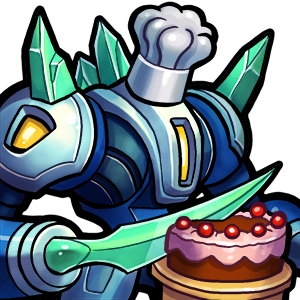 Balancing Redeemer has proven to be quite the opposite of a piece of cake.

As for how Redeemer will be changed this time… stay tuned. I’ll be posting a youtube video on the topic later today.

We’re also going to be making the following changes in the same balance patch (going live at 11:59pm ET on Wednesday):

Kinetic Driver: Ability cost decreased from 3 to 2. We initially priced Kinetic Driver’s tech-sniping click ability at 4 because we were worried that if it was costed too aggressively, players would find it annoying to have their buildings constantly sniped. We later decreased the cost to 3 after we learned that most players were only clicking Kinetic Drivers at the last possible moment, right before they ran out of lifespan. We didn’t see any harmful effects from that change, and we still feel like Kinetic Driver’s ability is quite weak, so we’re going to try pushing it one notch further. If it turns out to be too much, we’ll revert the change later.

Deadeye Operative: Stamina 3 added. Like Redeemer, Deadeye is a unit that has gone through a lot of changes. Many players have complained that Deadeye mirrors are still a little dull and often lead to draws or overly simple endgames. We thought about a number of possible changes that could fix this, but we ultimately decided to try something simple first. We’re simply giving the existing Deadeye Operative 3 stamina, so you’ll only be able to click it three times. That means with four Deadeyes, you’ll only be able to snipe 12 Drones throughout the course of one whole Prismata game. This should make it harder to completely ruin your opponent’s economy with Deadeyes, ensuring that Deadeye games lead to more complex endings where both sides still have Drones available.

Ebb Turbine: Start-of-turn ability now gives 2 gold instead of 1, but click ability now gives 3E instead of 4E. HP reduced from 5 to 4. This is a change we planned ourselves for the last patch, but never got around to testing in time. Many players had suggested this modification as a way to improve Ebb Turbine’s performance in situations where Drone supplies were low, or the player with the Ebb Turbine was being breached. Though it’s a small change, we think that it adds some additional depth to Ebb Turbine games, so we’re happy to implement it. The nerf of Ebb Turbine’s HP ensures that it still remains a viable target after breaching.

Tesla Coil: Cost reduced from 12GGB to 11GGB. Now comes with 2 Engineers instead of 3. Tesla Coil was recently changed to produce 3 Engineers when constructed instead of 2. This change was made for two reasons: to weaken the unit slightly from its original 10GGB price, and to effectively increase the Engineer supply available when players went for Tesla Coil strategies. Unfortunately, the unit is still a little bit too strong (which is particularly bad given how powerful Tesla Coil is at shutting down counterplay). Many players also found that the additional Engineer supply simply served to make Tesla Coil games more boring, as three or more Tesla Coils being bought often led to one or both players having an army consisting almost entirely of Tesla Coils. We hope that the current change will address both of these problems by slightly weakening the unit, as well as making it more difficult to get 3 or more Tesla Coils because of limited Engineer supply.

Note that we’re waiting until Wednesday to deploy the patch. This means that today’s Prismata Alpha World Championship Grand Prix event will not be affected (except by the temporary removal of Redeemer).

Keep your eyes posted for that Redeemer video, which will show up on our youtube channel later today!