Both the Mac build and the Steam edition of Prismata are still very much in development, so you may encounter bugs or crashes. These are test builds! That said, they’re far enough along that they should work for most users.

Our current plan over the next couple of days is to make sure these builds are working well, then switch on achievements, and then mass email all Prismata supporters to notify them of the update. Those mass emails generate a lot of traffic, so we’re hoping to iron out all the major bugs by the time they go out!

If you encounter any problems, you can use the in-game bug reporting system or contact support@lunarchstudios.com. Your feedback is super appreciated!

Mac users who want to test out a desktop version of Prismata can now do so. A couple of caveats:

An installer is available here if you want to give the Mac build a try: https://s3.amazonaws.com/play.prismata.net/installer/Prismata_installer.dmg

We’ve uploaded one Steam Beta access key to Humble for each player who supported Prismata over Kickstarter and Paypal. These keys allow you to install a “Steam Beta” version of Prismata that provides access to some of Prismata’s Steam features, including the following: 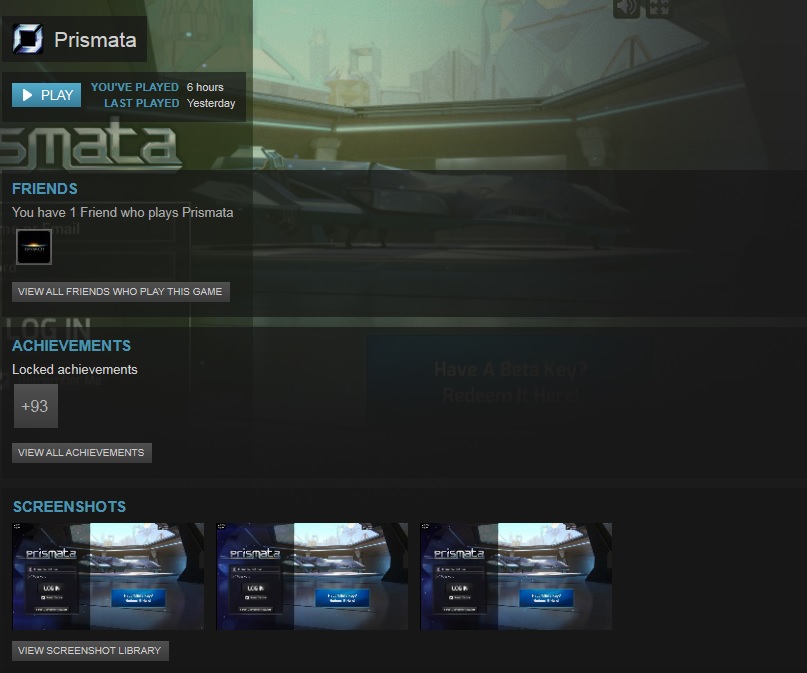 The easiest way to get your key is to enter your email address into the Humble Order Resender here (it needs to be the same email that you used to support Prismata over Kickstarter or Paypal). You can also follow BlaqkAngel’s instructions here.

Some Q&A about the Steam version:

Q: Do updates work via Steam?

Yes. We have updates all set up so that whenever we deploy a new version of Prismata, it simultaneously becomes available on web, desktop, and Steam versions. It sometimes takes a few extra minutes for Steam to make the latest version available, but your software should update automatically.

Q: Is Mac supported on Steam?

We did enable the Mac build in Steam, and it appears to work, though with the same caveats discussed above (no AI support yet, and some known graphics bugs). Feel free to give it a try!

Nope. Prismata only uses Prismata accounts. Steam accounts only matter for the purchases in the store or the Steam friends feature.

Q: Does Lunarch care whether players use the Steam version?

It’s up to you! All versions of Prismata connect to the same servers and offer all the same features. If you have lots of friends on Steam and want to spam them all with notifications whenever you play Prismata, we certainly don’t mind!

Q: What about purchases? Does Valve take a ton of the proceeds if we make purchases using the Steam version?

Q: Are purchases transferable between the Steam and non-Steam versions of Prismata?

Yes. For example, you can purchase Shards for your account using Paypal via the play.prismata.net website, and then spend those Shards in the Steam version.

Q: When will achievements be switched on?

Almost immediately. We’re readying a client update that will enable them, and we’ll deploy it as soon as we’re confident that the Steam version is behaving OK. Not all achievements will be initially available; some will be added later.

Q: Do I need to use the Steam version to get achievements?

Nope.  Achievements are supported in both versions. You can collect and equip Prismata achievement badges regardless of Steam. That said, if you want your achievements to show up in Steam, you need to unlock them while connected to Steam!

Q: I’m having a problem!

We love feedback and benefit a huge amount from user-submitted bug reports. Use the in-game feedback form or contact us via support@lunarchstudios.com.