Prismata is different from many strategy games in that when challenging an opponent, you don’t build your army from a fixed tech tree, nor do you bring a deck of cards with you to battle. Instead, the units available for purchase are randomly chosen from a set of dozens of different units, meaning that new strategies must be planned every game.

However, there is one special set of units—the Prismata base set—that is available in every single game.

In this article, we’ll be focusing on the base set, which lies at the foundation of all of Prismata. The Prismata base set contains eleven core units, providing a flexible and reliable selection of technologies that you can use as a starting point whenever you begin planning your strategy. The base set units in Prismata allow you to ramp up your economy, invest in technologies, and obtain essential offensive and defensive capabilities that can supplement the rest of your forces. 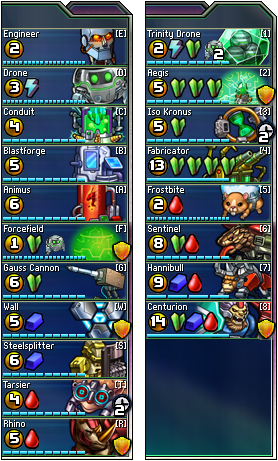 The Prismata Base Set, alongside one example of an 8-unit Random Set. The random units heavily influence each player’s choice of strategy, but the base units form a critical backbone of supplementary forces.

Prismata’s base set units are not particularly strong; indeed, they’re deliberately balanced to be a bit weak, just as a small nudge of encouragement to players, pushing them toward the sharper, more tactical units found in the random sets. But in times of desperation, you’ll come to rely on the base set units—the stalwart, dependable forces that are always there when you need them. Let’s take a look at each of the base set units. Remember, you’ll be seeing these every game, so learning to master their abilities and strategies is crucial.