The following change will go live this weekend:

(It formerly produced 5 for you and 2 for your opponent.)

It will still cost GGGG as it did before. 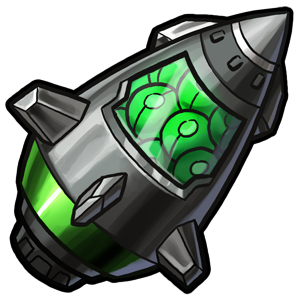 This change has been a long time coming. Will and I have been messing around with Cluster Bolt rushes for a loooong time, always worried that they might be a little too strong. Though we still don’t really know of any Cluster Bolt auto-wins or p1/p2 imbalances, there are still a number of concerns we’ve had, namely:

Many of these issues were raised in a recent reddit thread by Prismata player Arkanishu, and a number of other players echoed similar thoughts in the comments. We were pretty confident that it was time to put an end to Cluster Bolt rushes.

There were a number of different possible changes we looked at for Cluster Bolt. Here were a few of the candidate changes that we considered:

Ultimately, after looking at the numbers, we felt that Cluster Bolt was actually just too good in its current state. In situations where the 2 damage “backswing” done by the opponent’s Gauss Charges was of low impact (either because it’s absorbed by a Wall or only used to damage high HP units like Conduits, Trinity Drones, or Gauss Cannons), Cluster Bolt offers too much value for too little cost. This led us to conclude that the best thing we could do was simply adjust the balance of Cluster Bolt by reducing the amount of “backswing” (and reducing the damage proportionally).

The proposed change (4 Gauss Charges for you and 1 Gauss Charge for your opponent) has a number of effects. In a purely mathematical sense, it’s actually a bit of a buff to Cluster Bolt. The opponent’s Gauss Charges cause damage half a turn before yours do; thus, reducing both sides’ damage by one helps you out half a turn sooner than it helps your opponent. However, the change severely nerfs (debuffs) the effectiveness of all-in Cluster Bolt rushes, because the attacker pays 40 gaussite for 40 damage, rather than 50 damage. This makes it much easier to defend against Cluster Bolt rushes, even using units in the base set.

Cluster Bolt all-ins will definitely still be a thing, especially with units like Venge Cannon around to give them some support. However, building a Conduit on turn 1 should no longer be mandatory in random sets with Cluster Bolt and Venge Cannon, and counterplay should be more effective.

As usual, we’ll monitor things after the change goes live to see if further changes are necessary.

See you in game!