This week, we’ll finally be unveiling our new UI. I made a video preview of it below; check it out!

There’s already a feedback thread up on the Prismata subreddit. Feel free to share any of your thoughts with me (good or bad), I will read everything in that thread!

The new UI will go live as soon as we complete two more small tasks:

I’m hoping we’ll be ready in a day or two. If it takes longer than that, it will probably be due to us running into some monstrous bug or server issue. **Crossing fingers…**

Welcome Talha, one of our new summer interns. Unlike most of the rest of us, Talha can actually make art and draw stuff. He’s gonna be creating shiny particle effects, animated emotes, and all kinds of other cool stuff.

You can see him with his tablet and sketches below: 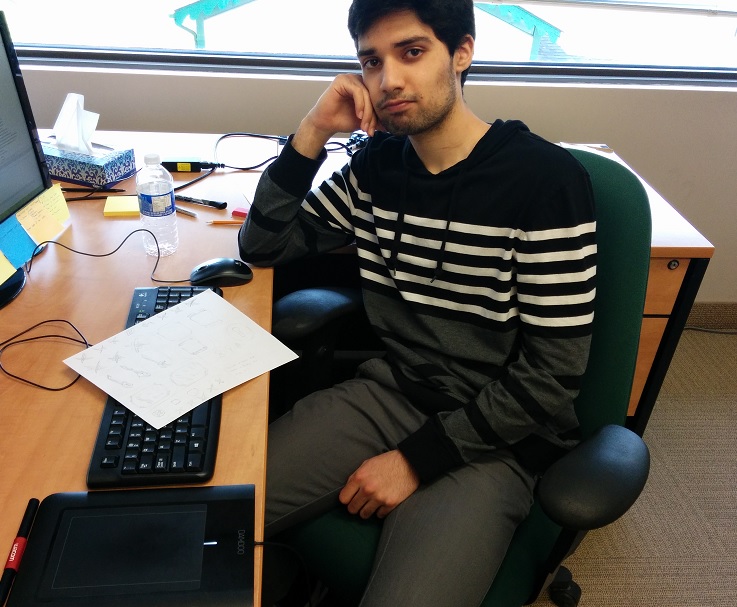 Talha looking like a real badass. If you ENHANCE on the piece of paper on his keyboard, you might just be able to make out some new in-game graphics being sketched out. As you can see, we even let our interns have access to sunlight.

Last week, we announced three new units. We actually also hinted at a fourth in this post (hint… press CTRL+A).

The fourth one… well, I uploaded its image with the other three above.

Here are some of our priorities for the next month or two:

Once we’re in a good position with our new player experience and our progression systems working well, it will be time for a party, right? Well yeah, pretty much. We’ll be gearing up for a big event in the summer. We’ll be making a new trailer, doing a press release, buying ads, and getting a boatload of new players into Prismata. We also hope to announce a Grand Prix circuit that will feed into a Prismata Alpha World Championship event toward the end of 2015.

Meanwhile, the Campaign is still on the horizon. There hasn’t been as much progress in the last month as I’d hoped (mostly because we’ve been busy with other things), but we did get a few things done. Xelgudu has some awesome theme music now… 😉

As for Raids, Alex has been trying to convince me that we should launch a super-experimental prototype for folks to try on the Alpha server. We’re still thinking about how such a prototype might work, but after running our April Fools test last month and learning quite a lot about what people liked and disliked, we think some additional experiments probably aren’t a bad thing. No promises, though!

I’ve said this before, but I honestly have *no idea* when we should put Prismata on Steam. I’ve talked to some developers who’ve had great success with Steam Early Access and actually earned enough funds from it to allow them to hire more developers! I’ve also seen many examples of games that I feel should have waited until their product was more polished.

What do you guys think? If you have thoughts about Steam or new features or anything else in this post, let us know on reddit.

That’s all for now, see you next week!