Before we get to today’s article, I want to introduce our latest new summer intern, Jordan Verasamy! 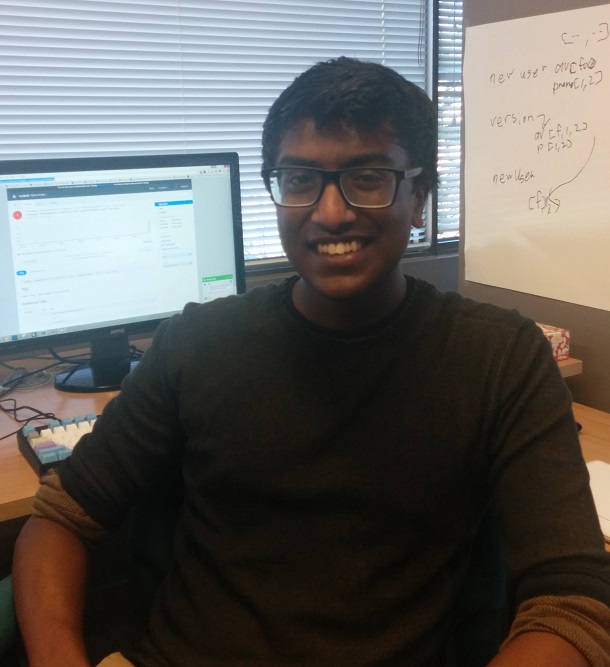 As you can see in the background, Jordan uses a mechanical keyboard with no letters printed on it. And yes, he looks this smug in real life. Like our other co-ops, Jordan was temporarily granted access to sunlight for this photograph.

Jordan will be working on various roles in support, QA, and automation. He’ll be catching bugs, making our server more secure, and simulating thousands of users on our system to help pinpoint scalability bottlenecks. He’s also a Tier 8 Prismata player.

Now, onto today’s article. The topic—a familiar one—is the Prismata community. Of course, we’ve droned on endlessly regarding how awesome our community is. What I would like to talk about today is how we plan on engineering that community in order to keep the level of awesomeness as high as possible. (And yes, those Prismata puns are totally intentional…)

Our Role in Managing the Community

During our alpha period, Prismata’s community has remained a pretty tight-knit group of passionate fans. However, there are more and more new players joining every day, and as our community grows, certain old systems will no longer be able to cope with the strains placed on them by a larger community. It’s not hard to imagine a future where the global chat is full of insults and spam, the Prismata subreddit is populated exclusively by memes, and the wiki is full of vandalism. As the developers, we consider it our personal responsibility to make design decisions that ensure Prismata remains safe and friendly as it matures. After all, our community is our most important asset in growing and sustaining the game.

You may not yet be aware of it, but we’ve seen all kinds of bad behaviour in the Prismata chats and subreddit. Though it’s not common, we’ve seen players hurl insults of every kind at one another in the Prismata global chat, including racist and homophobic remarks. We’ve seen players intentionally waste time in games, or spam their opponents with hundreds of emotes. We’ve even seen players attempt to abuse bugs in Prismata to disrupt other players! (Seriously!) As the game’s community gets larger and we add valuable collectible rewards and real-money transactions to Prismata, it will be increasingly important to add features to prevent these and other types of abuse.

Of course, every Prismata player shares in the role of being caretakers and stewards of our growing community. The first and most important step in preserving the game’s friendly vibe is simply for everyone to be nice to one another, helpful to new players, and welcoming of all users’ opinions. Arguments or insults in the Prismata global chat can truly drive new players away and be pretty damaging to our attempts to grow the audience. Games like League of Legends are notorious for their toxic online communities, and toxicity likely costs Riot Games millions of dollars in lost player engagement (Riot has even hired data scientists in attempt to reduce toxic behaviour among League of Legends players, with some degrees of success). Naturally, we don’t want Prismata to end up like that. Most players want to conform to the expectations of what constitutes sportsmanlike play, but those expectations aren’t always clear. Part of this is our fault for never really clarifying what types of behaviours are unacceptable. So from henceforth, we’ll try to be a bit more clear.

What Constitutes “Good Manners” in Prismata?

We often get questions about what kind of behaviour is acceptable on the Prismata servers. Though we encourage players to be kind and show good sportsmanship while playing Prismata, here are some clarifications on 3 rules that will be enforced:

If you notice a player breaking any of the rules above, feel free to report them using the in-game bug-reporting feature, or contact us using support@lunarchstudios.com. In the future, we may add direct reporting within Prismata, or even automated detection of behaviours like intentional disconnection (autodetection features have worked quite well for online chess sites, for example.)

Notwithstanding the rules above, here are some important clarifications on things that are allowed:
Additionally, here are some guidelines for good sportsmanship. We will not enforce these, but other players might consider you to be impolite if you break them:

Of course, simply telling our players to “be nice” isn’t always going to be enough. There are a number of steps that we—Lunarch Studios—will be taking to preserve the awesomeness of our online community, in the form of rules, policies, and new software features that explicitly target unwanted player behaviour. Today, I’ll be outlining some of them.

How Things Will Change, and How You Can Help

First off, a story. Sometime earlier this month, we received a report that a user was annoying opponents by repeatedly spamming emotes. No problem! Within 6 hours, we had deployed a server-side rate limiter to emotes, meaning that users were limited to just a few emotes, after which they’d have to wait a number of seconds or minutes before emoting again. Most players likely didn’t even notice this, but it had the desired effect, it was super-simple to implement, and most importantly, it sent a clear message to would-be emote spammers that annoying their opponents wasn’t OK.

It’s important to remember that Prismata is still in alpha, and is still very much an evolving product. While we do have plenty of anti-abuse features in the software (the anti-flooding feature for global chat was added long before we ever showed Prismata to the public), it’s likely that we’ll need to add more. Different games take wildly different approaches to combating abusive player behaviour, and we’ll always be looking for solutions that are a good fit for Prismata. This will be a dynamic and evolving process, and we’ll be looking to our community for feedback on the policies that will work best for us.

One of the key benefits of holding a public alpha is that we can benefit from our players’ exceptionally good talents for discovering methods of abusing other players within the game. Seriously. By finding out about problem behaviours now, we can implement fixes early and make sure those fixes work for our community. We plan on being extremely proactive regarding any and all forms of in-game abuse, and generally pretty forgiving toward players (though we’re still prepared to hand out bans to obvious or repeated abusers). If you notice anything, feel free to report it using the in-game bug reporting system, or email us at support@lunarchstudios.com. If you find a way to break Prismata or abuse a bug in a way that could harm other players, compromise their secret information, give you an unfair advantage in-game, or result in an unfair distribution of rewards, we have a special badge for you:

Of course, If you dislike any changes that we implement or have opinions or suggestions, feel free to let us know about that too!

Talking concretely about planned anti-abuse features is a bit difficult, because the plans themselves are still a bit unclear. But here are a few nebulous discussions about the direction that we’re heading in:

It’s clear that a single global chat channel can’t stay in Prismata forever (we don’t want it to turn into a massive flurry of copypasta and spam!) But we do plan on keeping global chat around for a while, and we already have the ability to introduce other types of chat channels (such as tourney chats, and party chats for raids). We may break the global chat up into multiple channels if it gets too crazy. We may eventually remove it entirely or convert it into an optional chat that must be deliberately joined, but those steps seem a long way off, for now.

We haven’t yet added a profanity filter to our chats yet, and it’s unclear whether we ever will. Games take wildly different approaches to this problem; options include no filtering, censorship-style filters (in F*** or **** variations) that could be on (or off) by default, SomethingAwful-style filters (where certain four-letter words are replaced by expressions like “poopoo” and “gently caress”), or even removal of entire messages that contain profanity. Some games (e.g. Disney’s Club Penguin) kick off users who swear. Some games (e.g. StarCraft 2) solved the problem by removing chat rooms entirely (though they were later added back after much player protesting). The right solution for Prismata may be some combination of the above, or perhaps something else entirely.

We’ll soon be adding the ability to mute specific players in chat by typing /mute PLAYERNAME. Look for that later this week!

Though players can no longer spam emotes indefinitely, there are still other problematic uses of emotes that we’ll need to address. Emotes can be a source of annoying, offensive, or hurtful behaviour, so we’ll be taking steps as necessary to ensure they’re mostly used in a friendly manner. Here are some steps we’re considering:

The third point isn’t one we take lightly. Collectible emotes are one of the key ways that we intend to generate revenue, which is needed to keep the servers running and purchase supplies of glucose to sustain the brains of Lunarch’s dev team. Allowing players to completely squelch their opponents could devalue emotes, so it’s a risky move. But we could allow users to silence their opponents if they’ve been emoting too much. We’ll see how players feel about the current rate-limiting behaviour before we take any such steps. 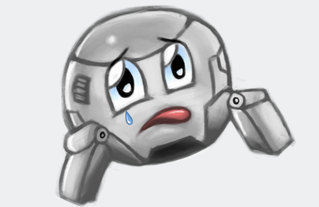 We’ve shown off plenty of new skins, but new emotes are coming too! The tear animates down his face.

Prismata’s actually a pretty easy game to develop securely. We don’t have to worry about randomness, and map hacking is impossible because there is no hidden information that could be revealed by looking at the game’s memory. This allows us to build the game using a security model that essentially doesn’t need to trust the users to do anything at all. Players who send illegal moves to the server, for example, are instantly caught. Most of the types of hacks seen in other strategy games are simply not possible in Prismata.

One change we’ll be making soon is updating the server to be more restrictive on how game timing is enforced, to ensure that players won’t ever be able to take longer for their turns than their clocks suggest, even if their game clients encounter bugs or connection problems. We’ve had several reports of issues where bugs caused both players’ clocks to freeze, and in addition to fixing these types of bugs, we’ll be modifying the server to ensure that problems on one player’s side don’t stall the game or propagate to the opponent.

Automatching prevents many of the types of ladder abuse that can be found in other games, and we can easily add restrictions to severely limit the effectiveness of win-trading and Elo-bot farming if they ever become a problem. However, we don’t intend to use the Prismata leaderboard as a method of determining invitations to major tournaments, so there won’t be serious incentives for players to compromise the integrity of the ladder. More details to come later this year when we unveil our Grand Prix system.

We’ll be making these and many other changes in the months to come. As usual, let us know if you have any thoughts!