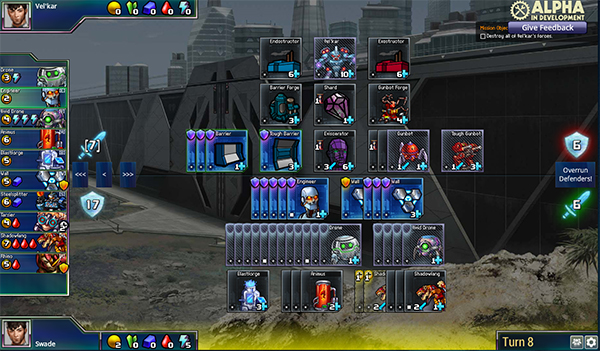 END_OF_DOCUMENT_TOKEN_TO_BE_REPLACED

After releasing our how-to-play video two weeks ago, we’ve been getting more questions than ever about how Prismata was designed, what Prismata matches feel like, and why we made such unconventional decisions in crafting the game itself.

Prismata is unique in that it combines aspects of both card games and real-time strategy games, which led to many difficulties and challenges in its design. This article will attempt to shed some light on the design decisions that seem really bizarre to first time players, and answer other common questions.

END_OF_DOCUMENT_TOKEN_TO_BE_REPLACED 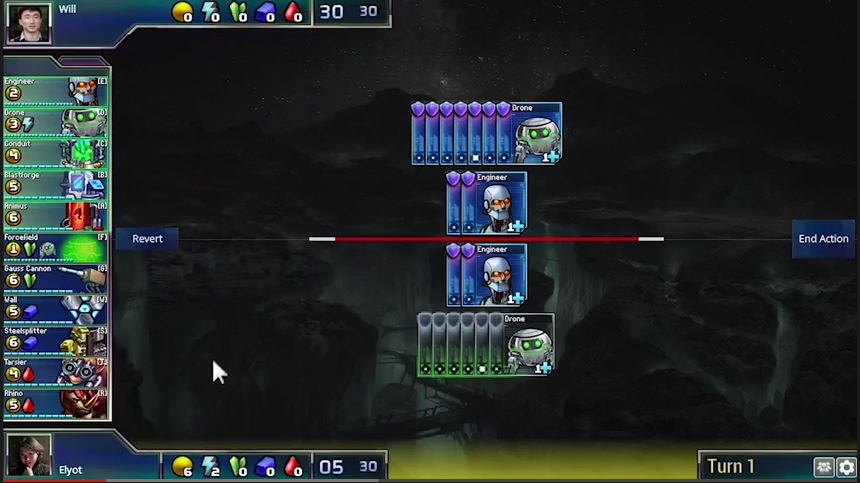 END_OF_DOCUMENT_TOKEN_TO_BE_REPLACED

In designing the combat units for the game Prismata, there are a number of important considerations relating to gameplay, narrative, and artistic style. The look and feel of the game units affects how users feel when playing the game, how they perceive the story, and how well they intuit the actual game mechanics. We began by designing the most important and difficult units: those in our base set. These are the units that users can purchase in every single game of Prismata, and they are among the first units that users encounter in the single player campaign. We needed their look and feel to be perfect.

END_OF_DOCUMENT_TOKEN_TO_BE_REPLACED

Armies fighting Aliens. Warriors teaming up to land a hit on a Dragon. Almost every RPG, strategy game, and card game containing battle of some sort has the concept of unit-on-unit combat—the notion of “I am commanding friendly unit A to attack enemy unit B”. After all, it makes perfect sense given our understanding of how warfare proceeds in real life. And it works extremely well as a gameplay mechanic.

In the Making Prismata series, we’ll explain our decisions in the design of the core gameplay mechanics and units. As a hybrid strategy game incorporating many different elements from real-time strategy games and card games, every element of Prismata’s final design has been endlessly scrutinized. Nothing was left unquestioned because it “worked”.

END_OF_DOCUMENT_TOKEN_TO_BE_REPLACED

The topic of luck in competitive gaming always ruffles a lot of feathers, leading to never-ending complaints and hostility from many different types of gamers: players whining about losses caused entirely by randomness, fans whining about their favourite pros being knocked out of tournaments due to bad luck, and everyone else whining about all the whiners. The subject arises frequently in discussions surrounding card games like Hearthstone, where the issue has become a hotly debated topic in the wake of serious complaints from professional players concerning the role of randomness in the game.

In developing Prismata—a competitive turn-based strategy game sharing many features with card games—we’ve questioned whether the presence of luck was really worth all the fuss, raging, and drama. Could a game like Hearthstone still be as popular and fun if the element of luck was removed?

Over the years, we’ve talked to many professional gamers and expert game designers, including folks from Hearthstone’s design team, about the role of luck in card games. When asked whether it would be possible to design a card game without luck, they all told us the same thing:

“Bad players will never think they can win, and they will stop playing.”

“Your game can’t thrive if it doesn’t have luck.”

“You’d be fucking crazy to try and make it a commercial success.”

END_OF_DOCUMENT_TOKEN_TO_BE_REPLACED

With the release of the first wave of Beta keys on the horizon, we thought it would be a good idea to show off some Prismata gameplay. In the following videos, Lunarch Studios founders Elyot Grant, Will Ma, and Alex Wice commentate a few friendly games and explain their decision-making and strategy.

While much of the look and feel of the game is rapidly changing as development continues, the core gameplay remains as it has been for years.

Subscribe to us on Youtube to be notified about all the new video updates. We plan on posting new videos weekly.

END_OF_DOCUMENT_TOKEN_TO_BE_REPLACED

As the guy at Lunarch Studios who does most of the work that a producer would do at a larger studio, I get to interact with a lot of very talented people—artists, musicians, and of course our very own writer Mike Fong. Mike lives 1000 kilometers away in Boston, so I often consult with him over video calls or instant messenger to ensure that the art we commission agrees with the intended story details.

Elyot: What changes to the bar do we want the artist to make?

Mike: Swade’s only friends are the demons inside his head. I just don’t think his regular hangout for drinking alone is a purple bar.

Elyot: At least it doesn’t look like a place where one goes to pick up chicks.

Mike: No, it looks like a place where one goes to pick up dudes.

Elyot: Yeah, yeah, whatever, we can mess with the hues later.